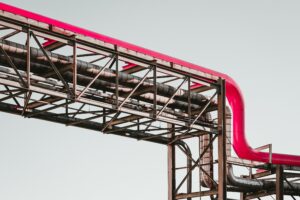 Pipe supports are supporting parts of the pipes in facilities that include piping systems. They are the essential elements for the stabilization and the carrying of the pipes. Let’s examine pipe supports briefly in the following article.

What is a pipe support? What are they used for?

Pipe supports are the components that transfer the weight from a pipe or the structural attachment to the supporting structures. The weight includes the weight of the pipe, the content that the pipe carries, the pipe fittings fixed to the pipe, and the pipe wraps. The fundamental functions of pipe supports are to anchor, guide, absorb shock, and support a particular load.

How pipe supports are used?

A pipe is rested on a supporting part often of a standard structural shape. The pipe may be fastened to this part with a pipe support. A pipe is either held from above by hangers or supports of various types on which it rests. Hangers are also considered as supports.

There are various types of pipe supports which can be installed to support dead weight loads, and constrain the pipe for thermal and dynamic loads.

Pipe supports include brackets, rod hangers, sway braces,  anchors, spring hangers, turnbuckles, struts, saddles, rollers, and sliding supports. Structural attachments are components that are bolted, welded,  or clamped to the pipe, such as lugs ,clips, clamps, clevises, and stops.Pipe supports that are used in temperature sensitive applications may also consist of insulation materials.

Design and selection of the pipe supports

The design configuration of a pipe support assembly is reliant on the loading conditions and pipe support location and is only limited by the imagination of the engineer and designer, as thousands of different designs have been used for specific purposes. The correct and cost-effective selection of pipe supports for different piping systems usually presents obstacles of different degrees. Proper pipe support selection must be the objective of the designing and construction phases.

What kind of loads do pipe supports carry?

It is the weight of pipe including the fluid it carries, weight of pipe fittings & other components (flanges, valves, insulation, etc.). This type of load may cause bending. In horizontal pipes, the deadweight load is taken care of by placing pipe support on a regular span to avoid sagging of pipe, and in vertical pipes, this load is taken care of by placing proper load taking support in the horizontal portion just before/after the vertical portion or lug support in the vertical portion.

A pipe used for carrying fluid would be under pressure load internally and externally. A pipe transporting high-pressure fluid is under net internal pressure while pipe with vacuum conditions may be under net external pressure.

The causes of secondary loads are the displacement of some kind. For example, the pipe connected to a vessel may be under load if the storage tank nozzle to which it is connected moves down due to tank settlement.

Support places are dependent on many factors, such as pipe size, piping configuration, the location of heavy attachments such as valves and fittings, etc. The movement anticipated at support points dictates the type of support required. The selected type of pipe support must be capable of accommodating movements.

It is suggested to select first the simpler or basic rigid pipe support type and add complexity as conditions warrant. It is better to use more simpler and economical types that satisfy the design requirements than more complex ones.

Rigid pipe supports that restricts movement in orthogonal directions and rotational directions. This usually is a part that is welded or bolted to steel or concrete.

There are two types of anchors: fixed anchors and directional anchors.
Fixed anchors used in those cases where movement in a line must be prevented. This is called as a ‘fixing point’. The most basic way to anchor a pipe is to weld it directly to support or structural part. For insulated pipes, a pipe shoe is welded and then the pipe shoe is welded to the structure.

Dummy legs are extension parts welded to elbows to support a pipeline and rests or anchors on steel components.

Size of pipe, length, and wall thickness of the pipe-extension depends on various aspects.

Vertical support that incorporates a rod. It may be a rigid, variable spring or constant support hanger.

Rod hangers or pipe hangers fixed to the pipe by a clevis, U bolt, a pipe clamp, etc.
The rod hanger gives support in the vertical direction and permits limited movement in the horizontal direction.

If restriction of pipe movement isn’t required, guides are used.

Pipe guides constrict movement along the pipe’s linear axis. This is called as a ‘sliding point’. Guides mainly used to maintain appropriate line spacing in a pipe rack and they restrict lateral or sideway movement.

Different than the pipe anchor, the guide permits pipe to slide.

A particularly engineered hanger that is designed to move through many inches of vertical movement with a minimal change in support load. There are different designs and types depending on the producers.

Constant hangers and constant supports are used when higher levels of vertical travel occur. Their function is to transfer the working load over the whole travel area while maintaining constancy, i.e., without any considerable deviations.

Helical coils that are used to support a dead weight load and allow movement. Spring supports use helical coil compression springs Helical Coil Compression is the critical component in both the type of spring supports

Shock absorbers mostly preferred in piping systems that are thermally operating. In a dynamic event, the shock absorber forms a rigid restraint between the protected part and the structure. This way dynamic energy can be absorbed and harmlessly transferred.

A Comprehensive Look on Pipe Spools