Home Metal Cutting Techniques: Comprehensive Explanation of What Exactly the Plasma Cutting Is

Metal Cutting Techniques: Comprehensive Explanation of What Exactly the Plasma Cutting Is 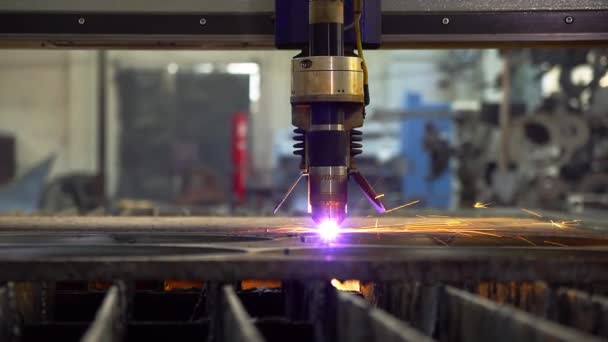 Plasma cutting can be defined as one of the metal cutting techniques used for cutting steels, stainless steels and aluminum. This cutting process is done as follows:

The torch nozzle is supplied with flammable gas. After this gas arrives at the nozzle, it is sprayed through a small section placed at the opening of the torch. Gas makes contact with the electricity and ionized. This ionized gas is commonly known as plasma.

An electrode charged negatively is located at the torch and the material to be cut is charged positively. Between these two ends, a potential difference exists. The nozzle design helps created electric arc to be constricted strongly. In this way, an extremely stable and narrow electric arc containing high amount of energy density is created. Unrealistically absurd levels of temperature (25,000 degrees Celsius) is achieved in the electric arc.

Plasma gas at extraordinary temperatures is blown onto the target material and immediately melts and cuts down the metal piece. There is not enough time for a combustion reaction to take place just like in autogenous cutting technique. Results obtained from these cutting technique are satisfactory. High precision and accuracy on the cut parts can be achieved in both high-alloy and low alloy (aluminum and stainless steel) metals.

History of the plasma cutting technique

The technology of TIG welding, also commonly known as GTAW, is discovered in 1941, during Second WW in United States of America. At that time, there was a huge necessity to connect the light metals such as aluminum alloys together. This necessity caused Tungsten Inert Gas (TIG) welding technique to be developed.

After 10 years from the discovery, intensive researches were begun about this welding technique. In early 1950’s, groundbreaking achievements regarding this issue were made. It was found that it was possible to change the characteristic properties of TIG welding technique by pinching the supply of gas. By doing so, the arc of welding gets narrower and as a result, heat resistance and gas speed increases. Moreover, there occurs a considerable increase in the temperature and voltage levels.

By achieving high levels of temperature, the metallic parts are subjected to electric arc with high temperature and velocity which blows the metal and melts it effortlessly. Thanks to the electric arc, precise and accurate cuts are obtained of the material.

As the process has been under the influence of continuous researches and development stages, plasma cutting technique has grown very popular and suitable in cutting operations in which high levels of precision and accuracy are aimed. This temperature intensive cutting technique is performed at temperature values around 25,000 °C. With this technique, metal fabricators are capable of cutting metallic materials that are not suitable for autogenous cutting techniques like in the case of stainless steel and aluminum.

The ionized form of a gas is called plasma. It is obtained by heating up the gas molecules to extremely high temperatures. It is also commonly known as one of the states of a matter (gas, solid, liquid, plasma). A portion of electrons are lost because of high energy supplement. These free electrons roams freely across the space, therefore, the core of the gas molecule remains ionized.

Being an electrically conductive state, plasma is famous for its characteristics such as responsiveness to magnetic fields. It can also increase the rate of a chemical reaction. There exist many usage areas for plasma.

There are many variations of this powerful cutting technique. It can be utilized in plenty of different ways. Each of these different ways and machines has their unique advantages in their field of usage.

The constriction of supplied cutting gas has to be strong in plasma cutting of fine beam. Rotational movement of the electric arc constricts the supplied gas which is used for cutting. Just before the plasma gas leaves the nozzle, a gas is supplied for protective purposes. In order to curb the flow of plasma, sometimes a strong magnet is utilized.

Because of this strong constriction, cutting accuracy and precision come closer with the results obtained from laser cutting technique. A precise, straight and narrow cut is achieved. The deformation of cut material will be lower since the less amount of heat is introduced in the process.

The single gas stream plasma cutting is a common method in the business of metalworking. At the nozzle region, a negatively charged tungsten electrode is used. A gas coolant is used to cool down the torch section but when cutting operations intensify, a water coolant can be used as well.

By using this technique, quality can be increased and higher speeds of cutting can be obtained. Protection and control of the ionized gas is ensured with this method.
Oxidation formation is prevented by the usage of secondary gas supply. Further curbing of the stream is possible in this method, which creates an even more powerful jet when compared to single gas stream plasma cutting.

Compressed air plasma cutting is another popular method since it brings a cheaper solution in plasma cutting operations when compared with the other techniques. However, several disadvantageous sides are present in this technique. Generation of dust particles and noise are substantially higher. Also, the usage of this technique creates necessity for the electrode to be modified as zirconium or hafnium contained in a container made out of copper.

Air compression is more favorable in particular operations such as cutting extremely thin materials since less heat is used in this technique.

When sheets of metallic materials with high thickness values, water plasma cutting shines as a suitable option. The coolant water is supplied to the nozzle and it is sprayed on relevant section of the cutting tool. It enables to compress plasma gas, cools down the nozzle.

Supplying the cooling water intensively helps to keep temperatures relatively low and prevents any kind of distortion on the cut material.